The task of the ship's propeller shaft is to transfer the torque generated by the engine to the propeller.
Details

Navigation work starts before leaving the harbour by appraising all necessary information regarding the journey.
The Navigator needs a great ceal of information This can come from a variety of sources:


The need for nautical information increases as the distance to a navigational danger decreases. More information = safer navigation.

SOLAS V Regulation 9- Hydrographic services
’’Contracting Governments undertake to arrange for the collection and compilation of hydrographic data and the publication, dissemination and keeping up to date of all nautical information necessary for safe navigation”.

SOLAS Is the International convention of safety of lives at sea.

This is a summary paragraph which does not specify the limits or quality of the work. Generally individual nations are responsible for maritime surveys and the construction and maintenance of aids to navigation. Countries make different levels of effort. Some lack their own agencies and buy services from other countries.

SOLAS Chapter V Regulation 2.2
Nautical chart or nautical publication is a special-purpose map or book, or a specially compiled database from which such a map or book is derived, that is issued officially by or on the authority of a Government, authorized Hydrographic Office or other relevant government institution and is designed to meet the requirements of marine navigation.

Terms such as "seas" and "safe navigation" are not rigorously defined. But "responsibility" should not be interpreted to mean that a chart publisher can be held economically responsible for inaccurate or missing information.

A notorious Swedish example is the 1977 grounding of the Russian tanker TSESIS at the edge of the fairway in to Sodertalje. The Swedish state was found guilty of responsibility because the rock had been discovered in a previous survey and was registered in the archive but the information had not been issued to pilots nor corrected on charts.


The Navigator will have to deal with charts based on data of a very variable quality. Most sea-faring nations publish charts over their own waters. Britain and USA issue charts covering the whole world, based on surveys carried out by other countries. Privately published charts are also available, mainly from German and British publishers. These are usually for recreational use.

Local charts often possess more detail but are also more difficult to keep corrected. A common practise is to use British charts from the United Kingdom Hydrographic Office, UKHO (about 3300 items) across oceans and along coasts and local charts for more restricted waters.

SOLAS V/19
2.1 All ships irrespective of size shall have:
2.1.4. nautical charts and nautical publications to plan and display the ship’s route for the intended voyage and to plot and monitor positions throughout the voyage, an Electronic Chart
Display and Information System may be accepted as meeting the carriage requirements of this subparagraph;
2.1.5 back-up arrangements to meet the functional requirements of subparagraph 2.1.4, if this function is partly fulfilled
by electronic means.


IHO (International Hydrographic Organisation) was founded in 1921 in order to coordinate the appearance of charts from different countries. The quality of these can vary depending on the resources of individual nations. IHO has issued standards for, amongst other things:


Charts are aids to navigation and should not be regarded as precision instruments - not even the electronic versions. IMO specifies the needs for charts on board (Carriage Requirements). Many vessels meet the chart requirements and publications by a combination of paper versions and electronic charts. A change of SOLAS regulations in July 2002 permits the fulfilment of chart requirements by offi cial ENCs as long as an adequate back-up is available. This may be printed charts or an additional, independent and approved ECDIS-installation, as required by the maritime administration of the relevant nation. 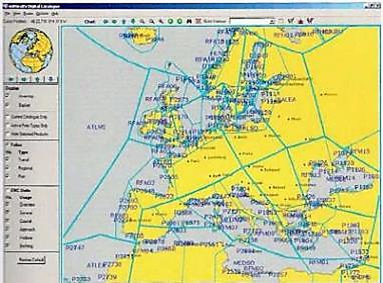 Charts are produced for a variety of applications, using different projections, scales and content, as specified in the chart catalogues issued by national authorities.

In addition to ordinary charts at different scales, there are also special chans for planning, for example "Pilot charts" that describe winds, currents, ice limits, etc, using statistics. There is a "Pilot chart" for every month of the year.
"Routing charts" describe the most common tracks over the oceans of the world.

Planning charts that include regulations are available for special areas, e.g. the English Channel is covered by BA-5500 (BA = British Admiralty). 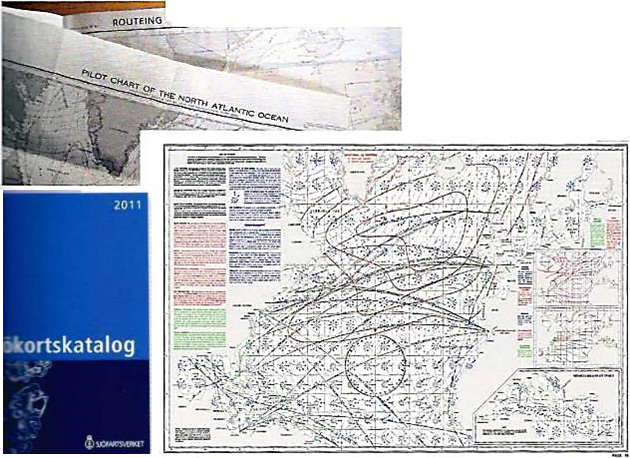