Shoals and rocks, particularly in designated channels, are shown by floating marks which are the responsibility of the Maritime Authority of each country.
Some shoals in coastal traffic lanes are also marked. Other reasons to set out a mark are to notify the beginning of an designated channel on a coast by means of an "approach or fairway buoy" and, for example, to notify the presence of a measuring device, the end of a pipeline on the sea floor or to mark the presence of fishing gear. Private marks may sometimes be encountered.
The marking of buoys uses a system recognised internationally by the International Association of Marine Aids to Navigation and Lighthouse Authorities, IALA. The system has two variants in different regions: A and B. Region A comprises European, Asian and African waters. Region B is continental American waters, Japan, South Korea and the Philippines. 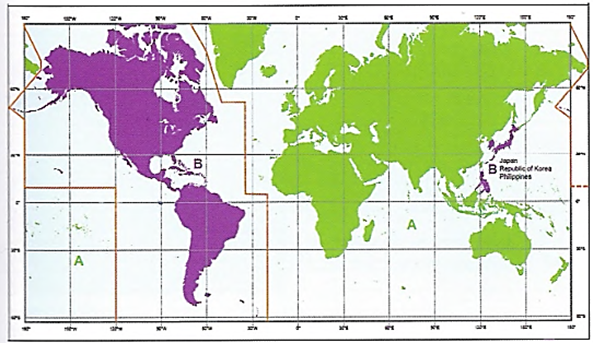 Floating lateral marks are positioned between the channel and the danger, relative to the direction in which the channel is intended for use. There are no standards to determine the distance of the mark from the shoal, not the length of its tether, so it is important that the Navigator checks the chart for the relationship between shoal and mark. 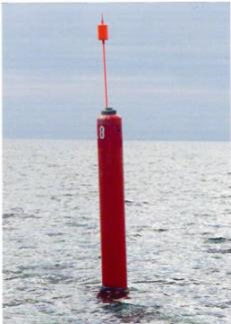 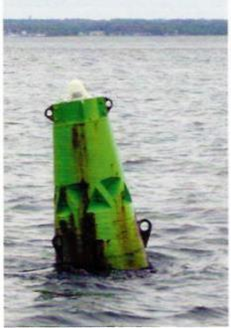 
It is not advisable just to use floating marks as the main method of navigation because they can alter their position depending on the tidal flow and height, or disappear completely, particularly after an ice winter. Marks can be found on both sides of the channel in dredged or narrow passages and may also occur on each side of a shoal where a channel divides.
The chart always shows how a specific mark should be used.
Marks are sited with respect to the navigable depth of the channel So vessels of shallower draft don't always have to pass the mark on the channel side.
In harbours with changeable bottom conditions it is possible to find additional marks or existing marks that have been moved temporarily.
The colour and position of floating marks are determined by two principles:
1. Lateral marks 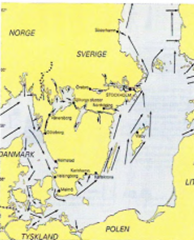 General directions in the Baltic Sea

The idea behind lateral marks is that, in a given fairway, a vessel shall always pass marks having the same colour on the same side, in the same fairway. Which side depends on the direction of buoyage.
SVERIGE
For example, in Baltic waters the direction of buoyage is mainly from Stromstad to Haparandra ("General Direction") and from the sea to harbour ("local direction"). Green shall be kept to starboard and red to port when going in the fairways direction. Port marks may have a red can as top mark and starboard marks a green cone with the point upwards, in order to aid identification. 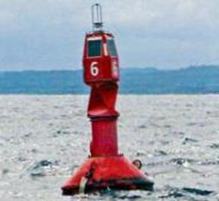 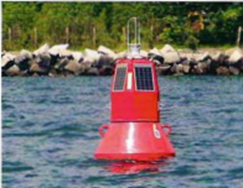 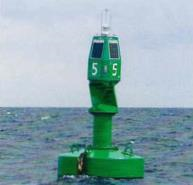 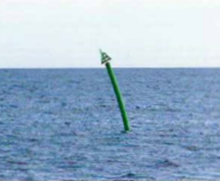 This chart symbol marks the General direction of buoyage and clearly shows the applicable colours for port and starboard sides of the channel.

This chart symbol marks the General direction of buoyage in black and white charts.

In principle the starboard marks should have cone top marks and the port marks have can top marks, but this is not always the case so color is the main distinguishing feature.

Region B
In region B lateral marks have the opposite colours but same shape of topmarks.

A ship outward hound between lateral marks in region A

There are occasions when the lateral mark principle doesn't give an unambiguous solution fo" a given situation. This occurs when two channels cross, when the channel divides and when a greater variety of appearances of marks increases clarity of interpretation. Cardinal marks are also used for coastal shoals in areas lacking a designated channel

Cardinal marks are characterised by both colour and shape so that even in the absence of a top mark the mark or buoy will be easily classified. Top marks are combinations of two cones, the points of which can be thought of as black bands , i.e. two upward-pointing cones = black band uppermost on the buoy.

Cardinal marks may be buoys or spars, with or without ghts. When lights are present, each type of cardinal mark can be identified by the light character. 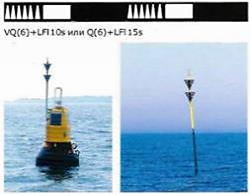 The colour codes are constant while the shapes of the Duoys can vary somewhat.


These single marks are placed on an isolated danger of limited extent, e.g. a rock or a wreck, and may be passed on either side. Top mark: two spheres. Light characteristic: Group Flashing  White


Safe water marks are found at the beginning of a channel leading to a harbour. They are also found in the middle of channels with traffic in both directions. Top mark: a sphere. Light characteristics: Iso, Oc, L FI 10s, M (A), White. 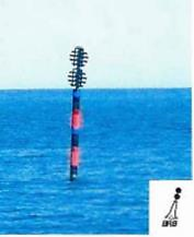 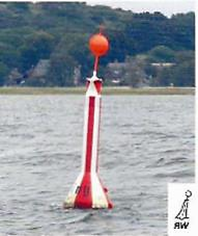 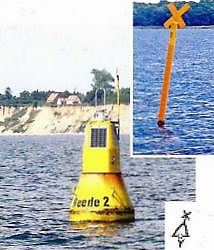 In harbours that are subject to silting floating marks may be deployed or moved, as necessary. The example shows a new and temporary spar buoy that marks a shoal- in the middle of the fairway

6.  New danger buoys
A new danger is a danger that has not yet been marked on charts or been the subject of a navigational warning, usually a wreck. They are marked by blueyellow buoys.


In some occasions, when a fairway divides into two branches, there maybe a preferred channel mark to make the Navigator aware of this. 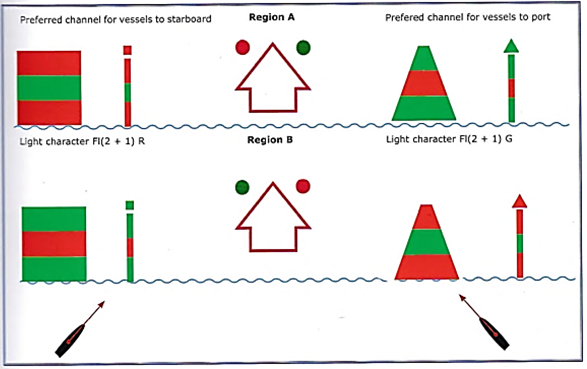 For more information on Navigational safety devices, see "Navguide IALA 2010" issued by the International Association of Marine Aids to Navigation and Lighthouse Authorities,  www.iala-aism.org
8.  Reliability
Floating marks are tethered by chains and an anchoring device. Those in frequently-used channels can be regarded as subject to continuous monitoring. None the less there is still a risk that a mark is not on station. This risk is greatest after a winter with sea ice.
There are a number of cases in which a Navigator was criticised for running aground because he assumed that a floating mark was in its correct position. 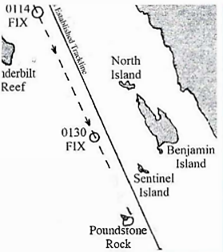 The pilot trusted a floating mark
The pilot's only EBL (electronic bearing line on the radar screen)course was set on the buoy marking Poundstone Rock. The buoy was affected by the light wind and weak current; which probably caused it to drift west on its anchor chain , towards the rock and away from the safe water to the east.By using this mobile buoy as his primary navigation reference, the pilot was basing his piloting on a floating aid that may have moved to the west and so reducing the margin of safety between the Star Princess and the rock. The Safety Board concludes that by only relying on visual reference to a floating aid, the pilot did not follow sound navigation practices. (Star Princess, MAR 9702 National Transportation Safety Board)
A floating mark that moved
In the Drogden channel the tanker OCTAVIUS went aground close by a buoy - and on its correct side. The decision to go close to the buoy was prompted by a meeting an on-coming ship. An extract from the
investigation stated: "The current was stronger at buoy 15 than north of the buoy and it is probable that buoy 15 had a more westerly position than the buoys further north. With a chain length of 21 meters and a depth of 8 meters it would have been possible for the buoy to be out of position by about 18 meters." Other contributing factors were a stronger current than expected and a bank effect (Swedish Maritime Authority report OKTAVIUS 2001). 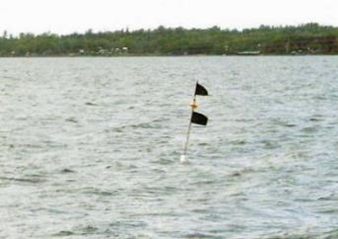 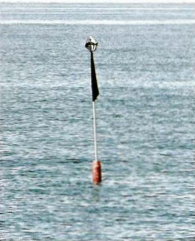 In different coitries, there are diferent systems the marking of fishing nets and traps. Before sailing