Angles on the chart

Courses and bearings can be described using angles relative to a meridian on the chart. Angular problems come in two classes:


The parallel world. Some of them need to use compass roses in the chart (the more - the better) and of a chart table.

Two Holding possible straight one to move of pieces them theof rulers steady woodwithout and or plastic moving a change are thelinked other of angle one together across, the chart to a compass rose. 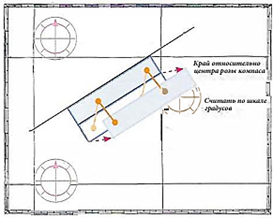 
With the edge over the centre of the compass rose it is possible to read off the angle of a bearing or a course line.
There are also parallel rulers with a graduated scale. They can be used more like a protractor and use the meridians as reference. 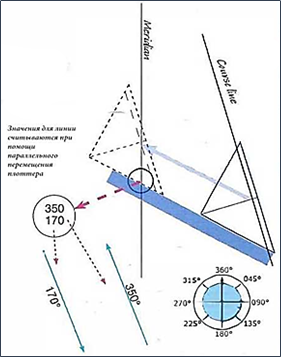 The triangle protractor is positioned with the line on its longest side (or simply the edge) over the course line. The origo (centre) of the graduated scale (in the middle of the longest side) is positioned over a meridian. The angle of the course is read off against the same meridian as is used for the origo. Now you only have to choose which of the two values given on the scale is correct, because the other value is 180° wrong!

When a course is close to north or south and doesn't cross a meridian the plotter will have to be moved, without any rotation, to a meridian.

PIace a straight edge, or another chart plotter, against one edge of the plotter and move it to the meridian.
Courses and bearings are not just lines, they are lines with a direction.
This kind of triangular protractor will show two values over the meridian. Which one of them is the correct one depends On the direction of the line, see the figure to the right.


Many different protractors has been invented over the years. This kind of protractor has a movable compass rose, that
has to be aligned with a meridian or a parallel. The angle is read against the "Zero"-mark.