This describes the standard nautical and nautical package of equipment required for unrestricted vessels. With the advent of satellites and sophisticated computer systems, navigation has evolved to a precision all-weather instrument.
Details

Communication between ship and shore and between ships and ships GMDSS stands for Global Mari­time Distress and Safety System.

It makes use of the satellite communications now available through the international mari­time satellite INMARSAT system. INMARSAT is a co-operative or­ganisation, which includes about sixty countries, which fund and take compensation according to each member's use of the sys­tem. Geostationary satellites are positioned about 36,000 kilome­tres over the equator to provide nearly complete global coverage.

The system provides automatic communications with an override facility for distress calls. Several service standards are provided. INMARSAT В and C have a dis­tress alerting facility at the press of a button. 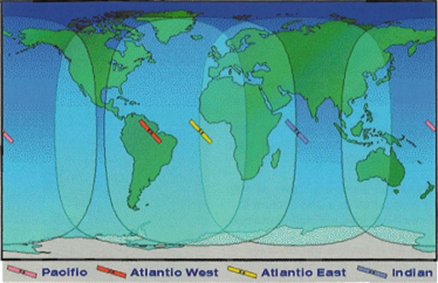 Satellite coverage around the world 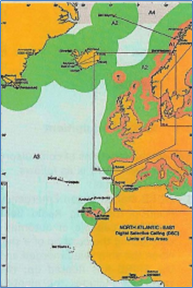 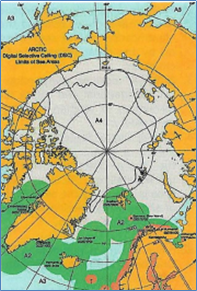 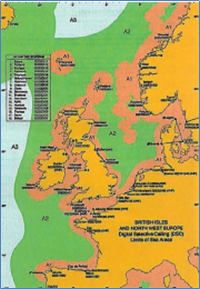 Charts showing Al and A2 around the North Sea and the East Atlantic coast. These charts are available for all parts of the seas.
The Atlantic falls primarily in area A3 and north of the Atlantic in the polar area A4

- Sea Area Al means radio cover­age of at least one VHF coastal station in which continuous DSC alerting is available. In principle, this is within 20 miles from the coast of populated areas.

- Sea Area A2 means within ra­dio coverage of at least one MF coastal station in which continu­ous DSC alerting is available. Range about 40 miles from the coast of populated areas.

- Sea Area A3 includes the rest of the seas within reach of an INMARSAT stationary satellite in which continuous alerting is available.

- Sea Area A4 means all areas outside Al, A2 and A3, which in practice means the polar re­gions of the Arctic and Antarctic.

The satellites are located above the equator and cover the earth from 70° South to 70° North. is worldwide standardised in the GMDSS system. The international Maritime Organi­sation, IMO , is the regulating body.