Navigation starts with a Passage Plan from berth to berth. The planned route is plotted on the chart or electronic chart of the navigation system
Details

The radar image can be presented in a number of different modes, each with its specific advantages and disadvantages. The image can be oriented with the head line up on the screen (Head Up), with due north pointing up (North Up) or with the vessel's course up (Course Up). Movement can be arranged so that the vessel is always at the image centre (Relative Motion, RM) or with land echoes stationary (True Motion, TM). There are several combinations of movement and orientation.

Head Up presentation shows an image of the objects around the vessel and with the heading line of the ship pointing bowfirst up the screen. Movements on the screen are shown relative to the position of the ship, so that as it is moving forwards echoes of the surroundings move from the upper to the lower edge of the screen. This is a useful mode for navigation in confined waters such as an archipelago.

The risk of collision can be judged in the same way as with a visual sighting, that is to say, an echo approaching on an unchanging bearing represents a collision risk.

However this mode does not give information about the course and speed of other vessels without further work (radar plotting).

Another disadvantage of this mode is that when the vessel turns, so does the image. This can be confusing. 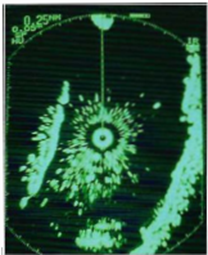 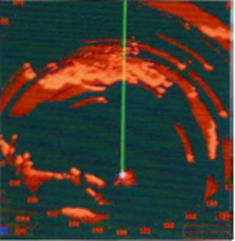 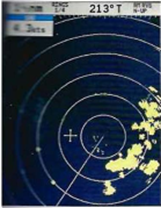 If connected to a gyrocompass, the radar image can be oriented so that North is represented at the top of the screen. Then the HEADING LINE marking the bow will be oriented  along the vessel's course and bearings are easily read off.

The advantages of this mode is that it corresponds to the chart image and the North Up image doesn't rotate during turns. The radar image is stabilised. If the course is irregular  only the orientation of the Heading Line will change. The chart does not have to be turned in order to correspond with the radar image. However some Navigators find it odd to be moving "upsidedown" when on a southerly course. 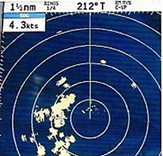 Using compass information the image is stabilised on the actual course with the Heading Line up. To this extent it resembles Head Up. However when the course is changed - intentionally or unintentionally - it is the Heading Line, not the image, that turns. Even large turns can be made without the image turning. Once the turn has been completed it will however be necessary to readjust the image so that the head line is once again pointing vertically. Some radar sets will reset automatically. Bearings in this mode are shown with their true values.

NORTH UP and COURSE UP are socalled stabilised images. Only the Heading Line moves during turns. 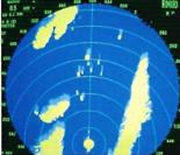 There are situations, such as navigating through an archipelago, when the Navigator wants to use as distinct a scale as possible and at the same time see as far forward as possible. These otherwise conflicting requirements can be met by moving the image OFF CENTRE. Off Centre can be used in combination with all modes.

Head up is presented in relative motion. North Up and Course Up can be combined with either relative motion or true motion. Relative motion means that the vessel's position is kept at the centre of the image and other targets move relative to this. The motion of other vessels will show as a resultant of their movement and the movement of the Navigator's own vessel (relative motion). Relative motion makes it fairly easy to judge the risk of collision but in order to get information on the course and speed of the other vessel it is necessary to carry out a radar plot.

In True Motion the position of the vessel on the screen moves in the direction of the Heading Line and at the speed of the vessel. The result is that moving objects such as other ships will be presented with their correct course and speed. This requires that the radar is coupled to the compass and log (STW) to present sea-stabilized true motion. The image will be ground-stabilized true motion with Speed Over Ground input. Speed can also be entered manually. Because the image of the vessel is continuously moving up the screen, the position of the screen image has to be readjusted when the distance between the vessel's position and the edge of the screen gets too small.

An IMO requirement stipulates that for anti-collision usage the radar shall be sea-stabilized, because the Rules for the Prevention of Collisions at sea take no account of Course Over Ground. So if currents are present the image of the land will not keep perfectly still. 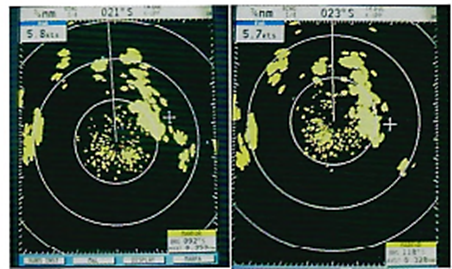 True Motion with Course Up. The course is shown digitally at the top of the screen. The right-hand image shows how the distance to the upper edge of the screen decreases as the vessel moves forward. Compare with the left-hand image