In the annex to IMO Resolution A.893(21) "Guidelines for /oyage Planning" the key elements of the Voyage Plan are rescribed as:


Appraising all relevant information
Planning the intended voyage
Executing the plan taking into account of prevailing conditions
Monitoring the vessels progress continously with respect to the plan.
This annex also states:
"The development of a plan for voyage or passage, as well as the close and continous monitoring of the vessel's progress and position during the execution of such a plan, are of essential importance for safety of life at sea, safety and efficiency of navigation and protection of the marine environment”.
Passage planning applies to all vessels and should be from earth to berth, including those areas necessitating the presence of a pilot.
The process of navigation


A description of the process of navigation looks like this:

The role of the Navigator


Strandings occur for many reasons: under difficult conditions or in shoal waters, when instruments suddenly stop working, or the engines stop with difficult consequences, or when information is inadequate, such as charts not kept up-to-date, etc.

However, many investigations have revealed that strandings have been caused by rather trivial circumstances. The navigator "wasn't on the ball" .. slept .. was drunk .. was talking on his mobile telephone .. the satellite receiver was not being used, or it had broken down ... and so forth.
Good navigational practise demands that the Navigator..
A stranding in the approaches to Gothenburg
"San Remo's Captain and First Mate stated that they were not able to localise the Vasskarsgrund light, nor the buoy located to the west of it". The officers tried to localise the Vasskarsgrund beacon with a searchlight and believed that they sighted it in the searchlight beam. Most probably they saw the remains of the old Vasskarsgrund lighthouse. Such a mistake would explain why they did not see the Vasskarsgrund light if it was working. The failure of the captain to notice Botto or the Botto west and Sven-Edvin buoys without starting his turn was probably caused by inattention as a consequence of tiredness and the fact that he had just woken up". SAN REMO was equipped with electronic charts but these were not functioning at the time of the incident. The captain reported that they had tried to get this repaired before leaving Stettin but had been unable to get hold of a serviceman. (Swedish Maritime Authority investigation, m/s SAN REMO) 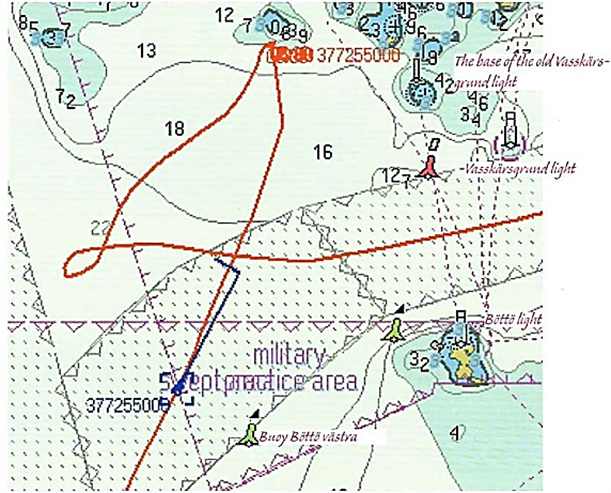 The red path shows the track of the vessel, which was equipped with an AIS transponder.
The Maritime Administration has the abilitiy to record the movements of vessels.


The most simple definition of Situational awareness is; knowing what is going on around you. It refers to the cegree of accuracy by which one's perception of his current environment mirrors reality;


Navigating is a continual process of checking position, course, speed, depth, nearby obstructions, identification of a:ds to navigation, observation of the weather, etc. Striving :o making decisions about actions, in order to follow the c!an. Mistakes need to be discovered in good time (at the atest, "in time"). Under difficult conditions good teamwork  a'ways makes navigation safer.


Navigating with two systems that are independent of each other is a well-established basic rule. The position from the satellite receiver can be checked against information from the radar, or by visual observations of land- or sea marks. Navigation systems are labour-saving, and most of the time very exact, but they have also introduced new sources of error.

We have come to regard a satellite receiver equipped with electronic charts as providing very exact positions and to assume that it will always be available. Many accident investigations reveal that the exactness and avalibility may reduce the willingness to use independent methods to control the position. Or even to check the position sufficently often.
Coping with electronic instruments can also cause problems in handling. Menus, functions and buttons are different on instruments from different manufacturers. It is
important that the Navigator is familiar with exactly the model of instrument that he is going to use.

Cross-checks save the ship from running aground. 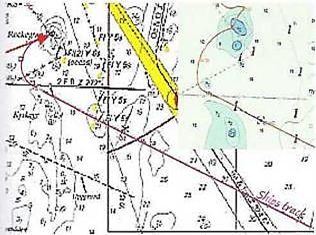 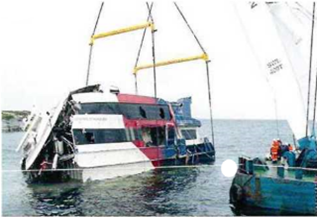 SLEIPNER was under way in darkness when she ran aground and sank. The Captain and the Mate were both adjusting the radar at the same time, they were not using the navigation system and were steering manually. Photo Alf Ove Hansen/TT

A stranding in the approaches to Karlshamn
The investigation has shown that the stranding was caused by the officer of the watch confusing the identfication of two buoys. As a result the vessel proceeded to the west of the channel with grounding as the result. The attention of the captain was probably diminished by a combination of the stresses of a two-watch system and the influence of alcohol. (Swedish Transport Agency investigation, m/s CRANZ)