An electric symbol is a pictogram used to represent various electrical and electronic devices (such as generators, motors, batteries, cables, wires and resistors) in a schematic diagram of an electrical or electronic circuit.
Details

Magnetic compasses are adjusted in order to diminish the effect of deviation. This also increases the force of the earth's magnetic field. The method of adjustment depends upon:
•Dividing the magnetism of the vessel into permanent and induced magnetism (it is not possible to compensate for the semipermanent magnetism).
• The magnetic field of the vessel is divided into longitudinal, athwart ships and vertical magnetism. The magnetism of the vessel is mainly generated during construction by the earth's magnetic field. So vessels built in the Northern hemisphere get a blue pole in their upper works and a red pole in the lower part of the ship. This permanent magnetism will remain constant unless some major event should occur, such as a collision, lightning strike or rebuilding.

Adjustment is carried out by utilising the same types of magnetism: the permanent magnetism is counterbalanced by the use of small permanent magnets (B- and C- corrections). The induced magnetism is counterbalanced by soft iron spheres (D-correctors) and a vertical tube filled with soft iron (a Flinders bar), usually located on the front edge of the binnacle.

Heeling error is caused by the vertical component of the vessel's magnetic field. One can visualise this as the magnets below the compass moving away from the compass axle as the vessel heels.
Heeling error is adjusted using small bar magnets in a holder underneath the compass. The vertical distance of the holder to the compass is regulated with a chain.
Before starting the compass adjustment procedure it is important to check the compass neighbourhood for extraneous magnetic objects and to see that any movable magnetic objects are in their normal positions.
If soft iron balls and a Flinders bar have been installed then they should be in their approximate positions. Heeling error is adjusted on an easterly or westerly course with a special instrument (vertical force instrument). Alternatively the adjustment can be carried out as the vessel rolls on a northerly or southerly course until the compass shows minimal oscillations.

The procedure is as follows, with the permanent magnetism being adjusted first:

1. The vessel steams on a course close to the magnetic north (CM = 000°). The athwart ships magnets are adjusted in strength and location so that the compass shows true north CC = 000°.
2. The vessel is then put onto a course with, for example, CM = 090°. The fore-and-aft magnets are adjusted so that CC = 090°.
3. Then the vessel takes up a course CM = 180°. If the compass doesn't show CC = 180° the athwart ships magnets are adjusted to decrease the deviation by half.
4. Next the vessel steams a course CM = 270°. Any remaining deviation is halved by adjusting the fore-and-aft magnets.
5. The induced magnetism is adjusted while on an inter cardinal course (45°, 135°, 225°, 315°) by moving the spheres. Finally any remaining deviation is halved on a course which is at 90° to the first inter cardinal used.
A major change of latitude may make a new adjustment necessary. 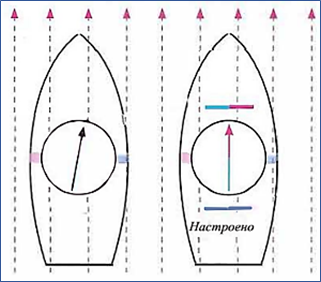 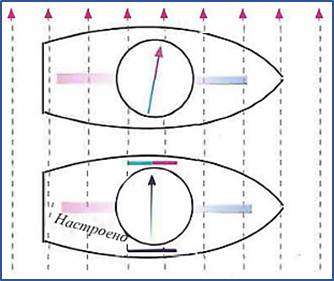 The compass is adjusted by putting small magnets, of opposite polarity to the ship's magnetism, close to the compass 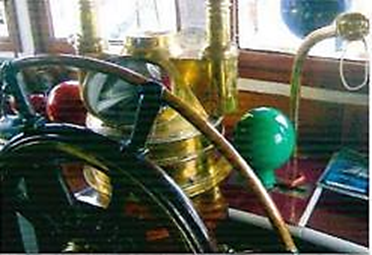 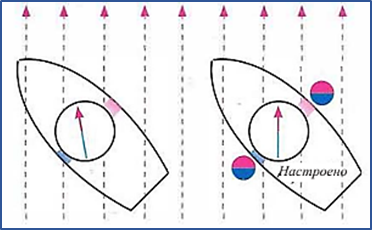 
To make a thorough examination of deviation the vessel has to describe a complete circle (360°). Deviation is noted down at increments of about 15°. In order to avoid lag effects this process should
be done in both directions of rotation. From the obtained values a smooth deviation curve can be constructed on graph paper. From this, the deviation at each 10° interval can be read off and entered into the deviation table. 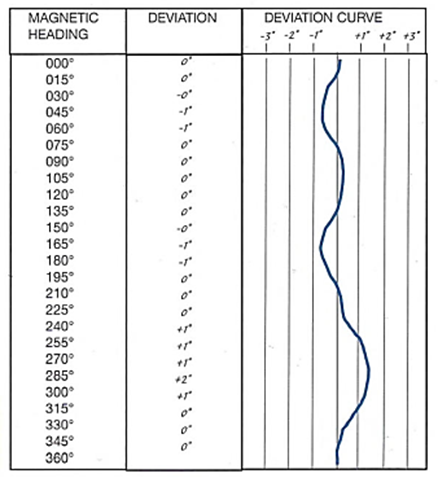 For more information about the compass and its adjustment, see:  http://msi.nga.mil/MSISiteContent/StaticFiles/HoMCA.pdf

The calibration of electronic compasses


Setting up and calibrating electronic compasses must be done using the main compass (master), not from a slave (daughter).

To deviate an electronic compass it has to be activated. After this the vessel is put into a slow and even 360° turn. When this is achieved, the process will start. During this process the instrument measures the variations of the magnetic field and performs a mathematical adjustment for the permanent and induced magnetism.

The procedure can be divided into four phases:


The fixed error (caused for example by bad alignment) is compensated mathematically in a menu, while taking a bearing on a distant object.
This procedure should result in a compass displaying magnetically true values - providing everything worked properly! 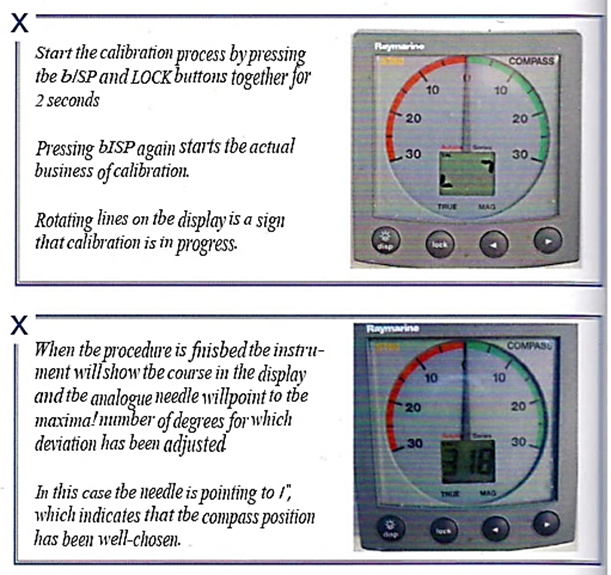