The planned route that is drawn on the chart from a previous position is called the Intended track (in some literature even called Course line). The term "course" is an angle, but the term is used in some other contexts. "Course" may mean an angle, a historical average course, a course read off from the compass or a numerical value by which to steer. In various navigational programs in computers and in books, there are a number of other terms in which "course" is part of.

The Ground track is an historic track over a given time interval. Course Over Ground is the angle of the Ground track to the meridian. (Sometimes called Course Made Good)

1. The Loxodrome
A person steering by compass has the impression of sailing "straight and true" but in reality the vessel is following a spiral curve across the face of the earth, the so-called "loxodrome" or rhumb line. This has a constant angle to true north so that all compass courses except 90° and 270° will end up at one or other of the poles..
2.  The Great circle


A route consists of a known point of departure, a series of intended course lines with staging points, usually called "way-points" (WPT, WP), and alter course positions that lead to a destination - a point of arrival. During the voyage positions are determined in order to check that the vessel is following the intended track. 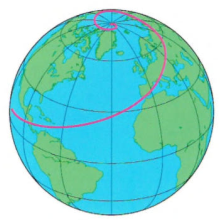 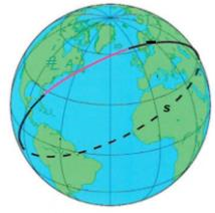