Calculate the recharge time of the battery

The compass is used to determine directions on the surface of the earth, i.e. courses and bearings. Three types of compass are in use on board:

The heart of the gyrocompass is a rapidly rotating wheel, a gyroscope. The characteristics of the gyroscope lie at the heart of the gyrocompass. The first characteristic is that a freely-suspended gyroscope will maintain its rotational direction in space. When a gyroscope is placed on a flat surface such as a table, an observer will experience that the axle of rotation is changing by 15° per hour in relation to the room. However in relation to space it has maintained its orientation while the earth itself has rotated by 15° (=360/24).

There are many everyday examples of the gyro effect, which causes a rotating wheel to resist a change in direction. For example when rotating a disc grinder will tend to resist an attempt to change its orientation.

The gyro is made north-seeking by using the earth's gravitational force. The principle is to hang a weight under the horizontal axis of the gyro. 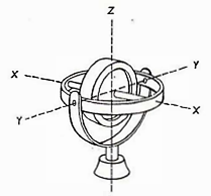 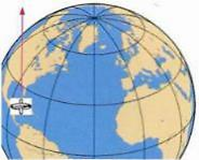 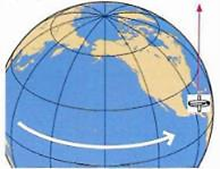 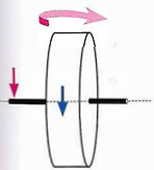 This North-seeking process is rather slow. The gyroscope doesn't immediately align with the meridian but swings from side to side of the meridian if the gyro isn't damped. Even a damped gyrocompass can swing for several hours after starting up.

A number of manufacturers have developed the gyrocompass since its introduction at the beginning of the 20th century with the result that many technical refinements have been introduced. So it is essential to consult the instruction manual to find out the operating specifics of each compass.
There are several technical solutions for the "bob" or "pendulum" necessary to make the gyro North-seeking, depending upon the manufacturer. One way is to have connected vessels filled with oil or mercury. Another solution is to suspend a ball in a fluid within a container with a weighted bottom. The ball floats in a fluid in an outer container. 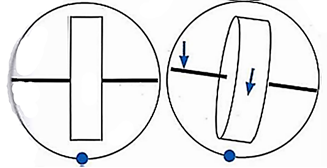 The principle of the search for the North. The weight creates a precessional force to counteract the gyroscope's tendency to raise the axis of rotation as the Earth rotates. This precession returns the gyroscope to its orientation along the meridian

The gyro setting in modern compasses is controlled electronically. Once again different manufacturers have different technical solutions.
The principle for electronic control is to register the gyroscope movements by sensors. These produce electrical signals that are proportional to the direction and size of the movement. After amplification the signals activate electromagnets and electric motors which cause the gyroscope to precess. Digitally controlled gyrocompasses have a shorter adjustment time compared to mechanical ones. 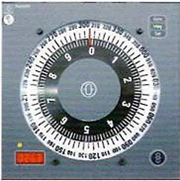 A gyrocompass with a compass rose intended for mounting at the helm. Further slave compasses can be installed as required. (Images: Raytheon Anschutz GmbH, Germany)

The gyrocompass consists of:

1.1. The gyrocompass: sources of error

Orientation error: caused by a failure to align the lubber 's line with the fore-and-aft-line of the vessel. In some compasses this can be compensated electronically
Transmission errors: these occur during transmission from the mother compass to the slaves. It is standard operating procedure to routinely check that all the compasses show the same course.

As the vessel gets under way an error is generated that is a function of latitude , speed and course. This can be adjusted automatically if the compass is supplied with information from other instruments. If this is not possible then manual adjustment must be made, either by installing a corrector or with the help of a correction table.
The North-seeking tendency of the compass is weaker at high latitudes. 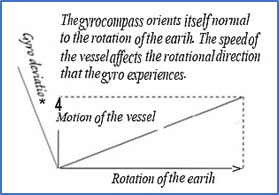 Rolling creates a force that affects the forces generated by the gyrocompass weights. There is no effect on a North/ South course as the force of the pendulum mechanism acts along the course, which is along the meridian, generating no error. Although the gravitational sensor is affected on a West/East course, the effects cancel out to give no average error. Errors only arise on intercardinal courses (NE, SE, SW, NW).
Mounting the gyro unit deep in the ship and close to the centre of roll decreases these errors.

A sudden change of speed or course will cause the gyro axis to deviate from its equilibrium position. This gives a so-called ballistic effect.
Compasses having two gyroscopes oriented at right angles have a lower sensitivity for large changes of speed and course.
There are also gyrocompasses that are coupled to an electronic magnetic compass (Transmitting Magnetic Compass). This supports the system with a course signal if the gyrocompass should experience a breakdown and acts as a off-course alarm.

Most gyrocompasses have an arrangement for the direct compensation of the course in the compass. This may be performed manually or automatically using signals from the GNSS.

It is also possible to make corrections from tables, or calculate the error according to the following formula:

Gyro deviation table. In order to calculate the gyro course for a planned route, change the sign of the correction factor.

The maximum divergence in reading between the master compass and repeaters under all operational conditions should not exceed ± 0.5°.