Understanding of the CAN 2 bus.

General information about the CAN bus part 2.

General information about CAN bus and Thrane & Thrane SAILOR devices

This chapter will cover the following topics:

In the rest of the course, we will describe how Thrane & Thrane uses the CAN bus to connect SAILOR's marine communication equipment, such as SAILOR mini-C, SAILOR MF / HF and SAILOR VHF.

The NMEA 2000 specifications were applied to ship equipment to find a
universal way of connecting equipment and to solve issues related to the exchange of data and physical hardware such as cables and connectors. However, certain applications of equipment can make the full implementation of the 2000 NMEA impossible, leading to a restriction of network functionality. Examples of such situations will be given in the following chapters.

Because the CAN bus protocol remains very strict for network use as a communication link between equipment modules, this NMEA 2000 communication channel link layer can still be used without necessarily applying all physical specification levels. This, of course, is possible while communication is maintained between the modules within the same hardware system.

This section will cover the following questions:

The new system of Thrane and Thrane SAILOR 6110 mini-C GMDSS (successor to the
very successful TT-3000EB mini-C GMDSS system) NMEA 2000 network was introduced as
a link connecting various modules included in this system, such as transceiver 3027, a message terminal 6006 and a terminal control unit (TCU) 6194 which, in this system, performs the function of the SSAS interface.

In this case, the requirements of the NMEA 2000 specifications are performed as accurately as possible, but not completely in relation to

the physical layer, as will be shown in this chapter. 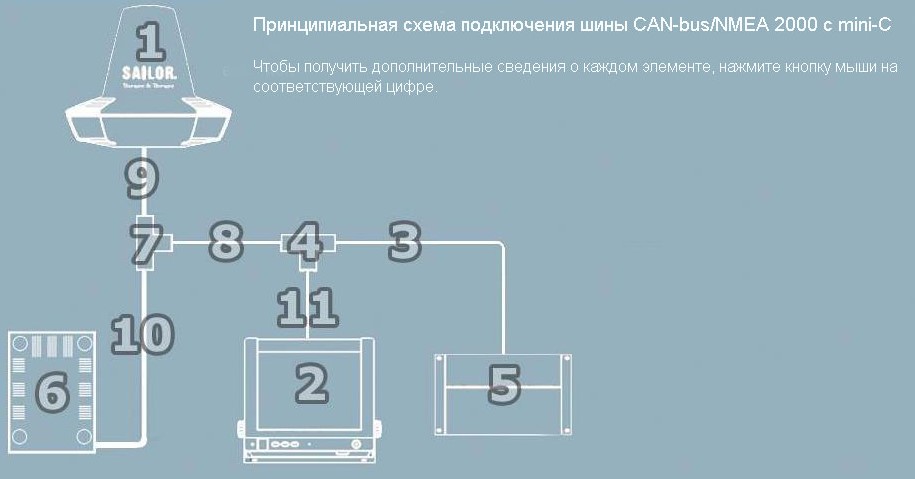 Configuring and connecting CAN bus / NMEA 2000 and mini- C GMDSS

This illustration shows the main mini-C network of GMDSS, which includes a trunk consisting of a combination of mini and micro cables. The trunk part with the mini cable connects
the mini-C transceiver to the mini / micro tripod. The trunk is continued by a micro cable from the same mini / micro tee to the micro-T-piece, to which the message terminal is connected via a drop cable.

The load at one end of the network is installed in the mini-C transceiver, and at the other end, the load built into the connector connected directly to the last network tee (micro) is used.
Power is supplied to the network via the mini / micro terminal. 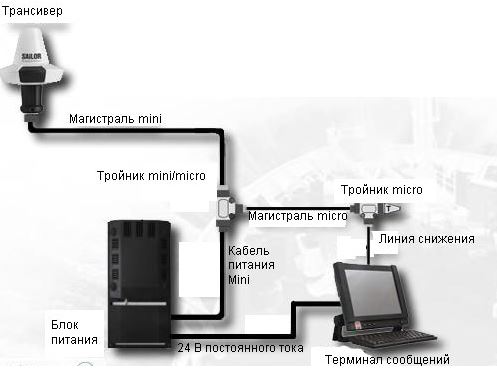 This illustration shows the main mini-C network of GMDSS, which includes the SSAS interface as a terminal control unit (TCU).

The network includes a trunk consisting of a combination of mini and micro cables. A section of the trunk with a mini cable connects the mini-C transceiver to the mini / micro tripod.

The trunk continues with a micro cable coming from the same mini / micro tripod to the micro-connector, to which the message terminal is connected via a drop cable.

The trunk is continued by the micro cable, which is connected to the TCU module, which contains the terminal resistor of this end of the network.

The terminal resistor of the other end of the network is installed in the mini-C transceiver. 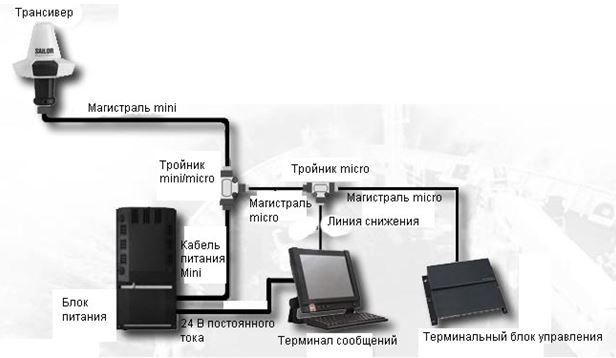 General information about CAN bus part 3.