Composition of navigation equipment on board
Details

Star Globe refers to navigational (or navigation) instruments that are used to determine the position of the vessel without the use of electronic devices.

According to the rules of the Russian Maritime Register of Shipping, the Star Globe is a necessary navigation equipment for ships with a gross tonnage of 500 or more (up to 50,000 reg. Tons). In limited sailing areas R2, R2-RSN, R2-RSN (4,5), R3, R3-RSN - not required.

The Navigation Globe is a hollow metal or plastic sphere with projections of the starry sky on the surface to avoid distortion. (Usually 159 stars are applied to the globe).

The ball rotates in the meridian ring, which acts as the observer's meridian. If the globe is taken out of the case, then this ring will act as an arbitrary meridian. The horizontal ring on the ball replaces the horizon.

There are also rings around the globe, on which degree divisions are applied. With the help of these rings, coordinates are determined during calculations, with an accuracy of 0.2-0.3. 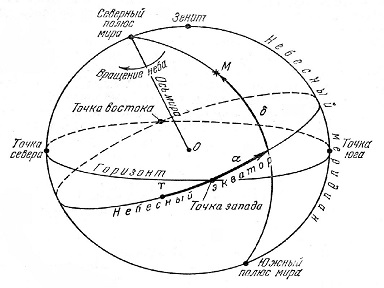 In order to start calculating a star globe, you need to check the date of its production. Since, due to precession (a phenomenon in which the axis of rotation of a body changes its direction in space), the reference point of coordinates is shifted by about 0.5 from the position of the coordinate grid at the time of manufacturing the globe. The positions of the stars become inaccurate over time. Therefore, for the accuracy of calculations, it is important that the stellar globe is not older than 30 years.

* The origin of coordinates on the Star Globe is the Aries Point - the intersection of the celestial equator and the ecliptic (this is the plane of the Earth's revolution around the Sun - the plane of the Earth's orbit), marked with the symbol XXIV - 360 meridians. The ecliptic is located at an angle of 23.5 degrees to the equator and is divided into 12 segments, the number of months in a year. Each segment (month) is divided into 30 divisions (days).

One such segment of the sun passes in a month. 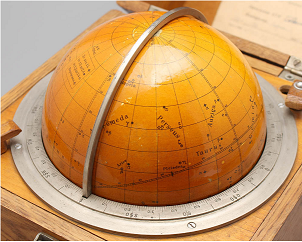 Globes from 2019 production are now in stock.

To clarify information and order, please contact the sales department sales@cirspb.ru or by phone in St. Petersburg +7 (812) 4-673-673 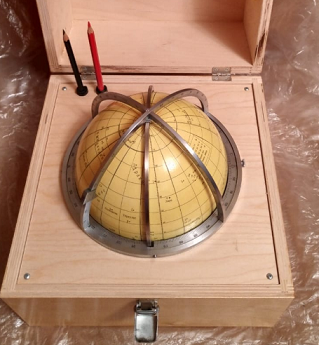