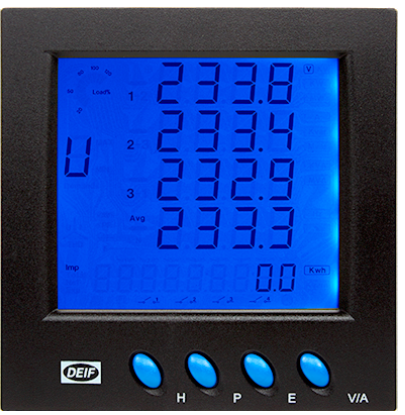 to order
$0
pcs.
To order
Not available
Kit with option
MIC-2 is a multimeter designed to measure AC parameters in three-phase and two-phase networks.
This multimeter can be used as a data transmission device to the monitoring system of a power plant. All measurements are available via RS-485 Modbus interface. Ethernet or Profibus DP interfaces are also available as options.
The measured parameters are displayed on the built-in liquid crystal display, which has 4 lines and a white backlight with an automatic shutdown function after a specified time.

MIC multimeter is a microprocessor-based measuring device that measures electrical quantities in a three-phase network. There are two types:
The MIC type multimeter can be used both as a measuring device and as a remote read / write device, where all measurements are transmitted to the control system via a serial interface.
MIC has an RS485 interface for communicating with a control system via Modbus RTU.
The built-in LCD display, showing parameters, has a blue backlight, the turn-on time of which can be adjusted to suit your convenience.

The MIB multimeter is a universal measuring instrument suitable for any three-phase network. The MIB measures the RMS values ​​of various electrical networks with the output of the parameters on the integrated LCD display.
MIB multimeter types:

Bridge with one person on watch

This describes the standard nautical and nautical package of equipment required for unrestricted vessels. With the advent of satellites and sophisticated computer systems, navigation has evolved to a precision all-weather instrument.
Details