The receiver identifies every satellite by a comparison of the received codes with those stored in the receiver. The receiver can then calculate the positions of the satellites in space using the orbital data that have been transmitted in the navigational signal.

The receiver measures the distance to a satellite by the time required for the signal to travel from the satellite to the receiver (time-of-flight).

This is done by the receiver generating an exact copy of the code transmitted by the satellite, which are then compared by a so-called correlation technique. This measures the lag between the signals and is converted into the distance to the satellite. Measurement errors can arise and include: 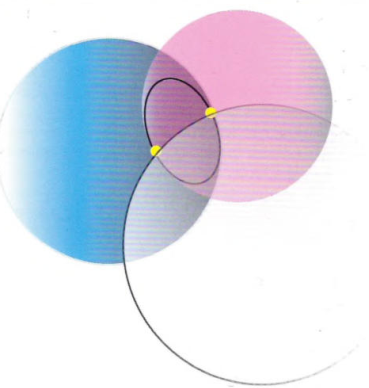 Two distances in space give two position spheres which intersect in a circle. A third measurement gives two positions on thatcircle,afourth distancegives a single position 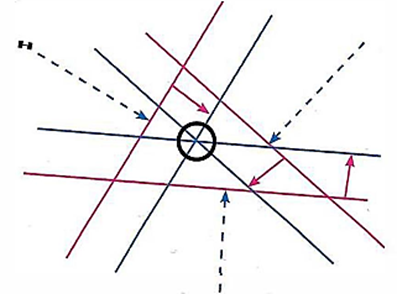 Position lines on the surface of the earth. A mathematical method reiterates all the pseudoranges position lines to a single position, as a!! the ranges contain the same error (red components). For simplicity this diagram is constructed in two dimensions although the satellite positions are three-dimensional 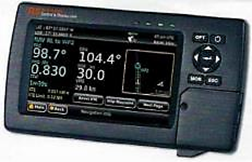 
The central function of the navigational system is to calculate the position of the vessel, which can then be plotted on the chart. Because the system also has memory, processor and clock, it can also generate other useful parameters such as COG, SOG, older positions (to show the Past Track) and a COGvector based on these older positions.

A Waypoint (WP) can be entered to mark a position for course alteration. Entering a series of Waypoint Positions will create a route. Then the GNSS receiver can calculate: distance, trip distance, ETA, Cross Track Error (XTE), Cross Track Distance (XTD).
The GNSS-set can only get the bearing and distance to the next Waypoint if the route has been activated.

Normally the GNSS will present the position on an electronic chart, which requires the use of a computer or plotter. When the connection to an electronic chart has been established then further functions can be introduced, such as an alarm for the risk of grounding.

There are more than 100 geodetic systems with advantages and disadvantages for various places on the globe. To get the most out of the navigational system, the Navigator has to enter, or at any rate check, a number of settings so that he is in control of what is shown and knows how it is calculated.