The task of the ship's propeller shaft is to transfer the torque generated by the engine to the propeller.
Details

The position given by a satellite receiver can be improved with a technique that uses receivers whose positions are known in order to calculate the extent of the current error in the satellite navigation system.
Differential GPS (DGPS) uses a stationary GPS receiver at a known position to calculate the error and transmit a correction factor. This requires a special long wave receiver.
The system was created when GPS had a degradation signal in operation. The GPS accuracy at that time was about 100 meters. DGPS is still functional and gives increased safety as well as more acccurate
values for speed and course.

To get full advantage of the correction, the onboard receiver must use the same satelites as those used for calculating the correction message. System that transmits correction signals from satellites are called Satellite Based Augmentation System (SBAS). Many satellite receivers come with this already installed and give "SD fixes" without additional installation. The system covering America is called WAA5 and that covering Europe is EGNOS, European Geostationary Navigation Overlay Service. 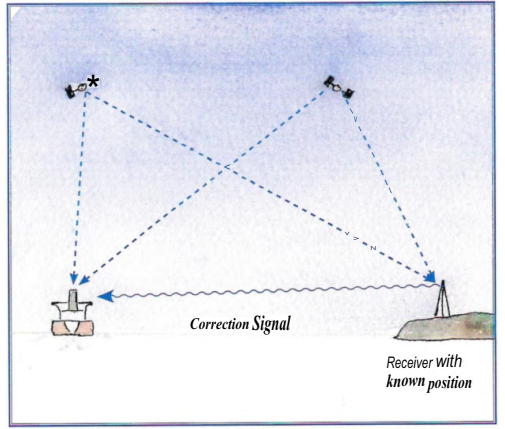 EGNOS is a European system that sends correction signals from satellites. EGNOS signals are sent from three geostationary satellites: two Inmarsat-3 satellites of which one is over the eastern part of the Atlantic, another over the Indian Ocean and the ESA Artemis satellite over Africa. On earth there are 34 RIMS (Ranging and Integrity Monitoring Stations), four main control stations and six connector stations.
RIMS enters the position of every EGNOS satellite and compares the very accurate measurements for each satellite with the measurement results from the satellite signals.
RIMS then transmits these data to the main control station through a dedicated network. The main control station then calculates the accuracy of the GPS and Glonass signals that have been received and works out the degradation in the positions caused by the conditions in the ionosphere. All the degradation information is included in a signals that is transmitted by a secure cata link to link stations that are distributed over Europe. The link stations send the signals to the three EGNOS sate ites which in their turn return the signals for reception by GNSS receivers that are equipped with the SD function.

The Wide Area Augmentation System are designed on the same priciples as EGNOS. It utilises 25 ground reference stations with known positions. They monitor the accuracy of GPS data and calculate the errror, which is then transfered to two master stations where a correction message is calculated and transmitted through two geostationary satellites, located over the equator. The WAAS positon is only accurate if the receiver uses the same satellites for which the corrections are transmitted. 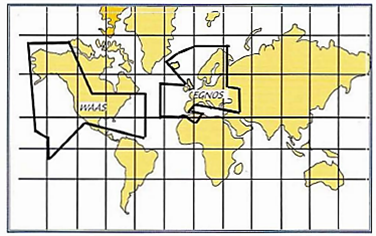 
eLoran is a navigational system that transmits high-energy impulses at low frequency (100 Hz) from land-based transmitters. It is being researched as back up in some areas. The systems provides a two-dimensional position, velocity, exact time information and other information. A receiver needs to access the signals from at least three transmitters. These send pulses at exact intervals and the receiver measures the time-of-flight of the signals, just as a satellite navigation system. 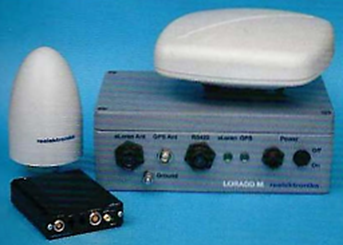 Receiver combining eLoran and GPS, two antenna types and a box of connectors. Courtesy of Reelektronika

Similar to a satellite navigation system, eLoran calculates latitude and longitude. Accuracy depends on the terrain over which the signal travels. Deviations from a preprogrammed propagation pattern are called Supplemental Secondary Factors (ASF). By storing and measuring these ASFs and correcting the measured transit time, positioning accuracy of up to 20-25 meters is possible. This works because ASFs are fairly consistent over long periods with little daily and seasonal fluctuations.

This result can be further improved with differential eLoran with an accuracy of 10 meters. Time signals are correct to within 50 nanoseconds from UTC.


Basically, position information is output in the same way as for a satellite system. Signals are received, identified and stored. The receiver calculates a conventional range at regular intervals, which is then converted to a position expressed in latitude and longitude.
The signal is somewhat slowed down by the atmosphere compared to the vacuum of space and is also affected differently by its passage over land or sea.


More information about eLoran can be found at: http://www.accSeas.eu 
The navigation information can be shown on a screen together with an electronic chart, which provides an easily-understood position. The Navigator can also make use of the Ground Track and COG vector, as well as the Planned Route.

The navigation information can be sent to:


A chart plotter is a robust instrument intended for outdoor use. There are many different models: some have built-in satellite receivers, others are intended for connection to a separate receiver. The type of electronic chart that can be used varies with manufacturer and type of plotter. Some can only be loaded with specific electronic charts on a memory unit while others have the capacity to read various kinds of electronic charts.
Those instruments also contain moreor-less manufacturer specific extra functions such as automatic passage planning, text information on harbours, ect.
The navigation computer can be anything from a laptop computer coupled to a GNSS by a USB port and loaded with a navigational program and electronic charts, to ECDIS on larger vessels. The ECDIS computer is certified to IMO specifications and is only to be used for navigation. The range of electronic charts that can be used in computers is greater than that for plotters. Navigational programs come in
all shapes and sizes, from freeware to extensive professional programs.
The arrival of surf tablets has influenced developments and taken market shares. Using a computer or a surf tablet is particularly attractive if you already own one. They are not so robust but the surf tablet can be protected by a cover.  A symbol of the vessel presented on an electronic chart gives the Navigator visually clear, unambiguous informatior about position and course in relation to dangers and the destination.  Navigation systems with electronic charts show the Navigator the positior of the vessel in relation to WP, dangers to navigation, course and so forth. 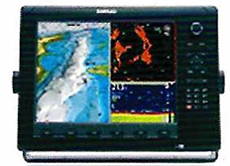 Screen with processor which can be connected to a GPS receiver and even other instruments, including radar, to create a complete navigational system Screen of a navigation computer (SeaCross)

A satellite receiver with electronic chart starts with this text

This kind of set-up makes it easier to construct routes and carry out measurements of course and distance, compared to a receiver without electronic charts. On the open sea where the safety margins to dangers are usually greater, these advantages are not so obvious, but they are none the less convenient.
Vessels that want to navigate using only electronic charts are required to have two independent ECDIS systems, according to SOLAS. It is not even enough to have two ECSs: such an arrangement will not be approved.
The navigation system/chart plotter can contain extra information about harbours, services, nautical information and live weather data. New functions are being continually introduced by different manufacturers.  Coordinating the navigation system with electronic charts doesn't, however, solve all problems. In fact it creates new ones, such as the requirement that the Navigator must learn
to manage the system properly. The relationship between menus and buttons needs practise to work smoothly. A network is also a potential source of errors and weakness.