Satellite navigational systems (GNSS, Global Navigation Satellite System) gives positions determined by measuring distances to satellites whose positions are known. Distance is measured by time-of-flight (the time it takes  for the signal to travel from the satellite to the receiver).
At the time of writing (2016) the American GPS (Global Positioning System) is the most used system. It has been in operation since 1995. The Russian system GLONASS is active but is only used to a limited extent. Galileo, a joint European system, is under construction, as well as new systems in India, China and Japan.
A satellite navigational system has three parts:
GPS has a function that enables the US Department of Defence to degrade the signal in order to prevent their enemies from using the highest degree of accuracy. This function is called Selective Availability (SA) and introduces a random error of about 100 meters. SA was switched off in 2000. The US military have issued a statement to the effect that they will not re-deploy SA but navigators in war zones should none the less be alert to the possibility. 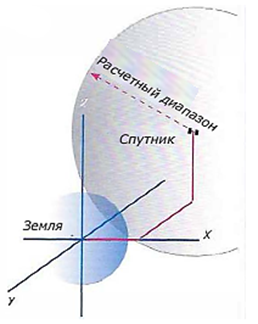 The positions of the satellites are determined in an x, y, z-system with origo in the centre of the earth. The calculated range creates a sphere of possible positions

1. The coordinates of the satellite expressed in a threedimensional coordinate system with the centre of the Earth as origo, are known to the receiver because of information transmitted in the signals.
2. The receiver clocks the time of flight of the transmitted signal and uses this to measure the distance to the satellite. The possible positions in space form a sphere.
3. To calculate an exact position in space requires at least four "positioning spheres", of which the surface of the earth can be one. This should mean three measurements from satellites but, because of errors in the clock frequency of the receiver a fourth measurement is anyway needed.
4. The end result is the position of the receiver in the coordinate system of the satellites. This is then converted to latitude and longitude coordinates.
It is by no means an automatic right for everyone to be able to receive GPS signals. They are the "gift" of the US Department of Defence.

In order that the system will work it is necessary for the positions of the satellites to be know from second to second - in spite of the fact that they are hurtling through space at 4 km/sec.

Clocks are necessary to time the radio signals and only the extreme accuracy of atomic clocks makes this level of precision possible. But even their extraordinary accuracy has to be monitored and corrected by the control system.

It is the function of the control station in Colorado Springs to ensure that the satellites are in their correct positions and to correct each of the four atomic clocks on board every satellite. This is done using data from the monitoring stations. The specification for the error of each atomic clock is to keep this to less than 7 nanoseconds, which is the equivalent of a 2 meter error in the position of the vessel. 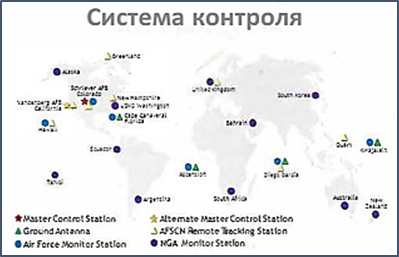 The locations of monitoring stations on the surface of the  globe and the control station in USA.
This diagram is from www.gps.gov where up-to-date information about the GPS is available

The system keeps track of the positions of the satellites with the help of the monitoring stations. The control station sends orbital information to the satellites, which in turn relay this to the receivers. This informs the receivers of where the satellites are located in space at any given instant in time.

2.  GPS satellites
The GPS system needs more than 24 satellites that circle the globe in six orbital planes with an orientation of 55° to the equatorial plane. Each plane contains four satellites. This ensures that at any moment there are at least six satellites whose height over the horizon is at least 9.5° everywhere on the surface of the earth. This is considered to be the lowest angle at which an acceptable signal can be received by a simple antenna. The oldest satellites have stopped working but new generations have been launched. Their useful life is expected to be from 7 to 12 years.
Steering rockets are used to stabilise and correctable position of a satellite relative to its intended orbit. The transmitting antennae must always be facing th^\earth. The payloads^of fuel and batteries are the factors that determine the useful life of a satellite.
Each satellite is equipped with four atomic clocks, each with an accurac^NQf 1 second in 1 400 000 years. (Newer satellite clocks have even better performance).
The satellites describe circular orbits at an altitude of 20,200 km (3.75 Earth's radius), and each of them weighs about 2 tons. Their orbital periods are about 12 hours. 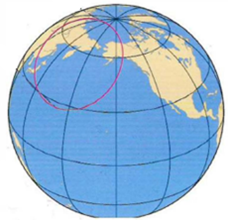 
Satellites transmit signals continuously on two frequencies, LI on 1575.42 MHz for civilian use (also called C/A, Coarse Acquisition) and L2 on 1227.60 MHz (P, Precise code). This is for military applications and provides greater protection from interference.

Owing to energy restrictions in space the signals are weak, about 50 W. The energy source is solar panels and, on the dark side of the earth, batteries. The carrier wave is coded with the unique code that identifies a satellite and the navigational information. This is divided into 25 blocks, each containing 1500 bits, and is sent continually. The transmission rate is 50 bits/second so it takes 12.5 minutes for complete transmission. The information contains:


Coding technology makes it possible for all satellites to transmit on the same frequency at the same time without interfering with each other (CDMA, Code Decision Multiple Access).  This coding ensures that only receivers which know the codes can use the system. The C/A code is widely-known, simple and accessible to everyone.

Receivers for the signals from navigational satellites come in a variety of shapes and sizes, for different applications. 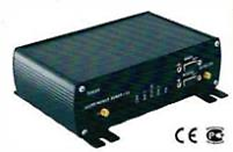 The time required to boot a receiver is quite variable, depending, for example, on whether this is the initial boot-up or if the system has been moved when switched off, the age of the unit, its quality and the manufacturer. Newer units boot faster.

The fastest boot-up is obtained when the satellite receiver has access to the current position, time, almanac and orbital data. This situation occurs when the unit is booted in more or less the same location and within a few hours of the latest position plot.

The time and almanac are valid but the orbital data are not absolutely up-to-date. Each satellite broadcasts its ephemeris data every 30 seconds.

If the receiver has been switched off for some weeks, stored without batteries or has been repositioned on board since the latest plot then boot-up will be even slower. Then the receiver must search for all possible satellites in order to obtain information of all satellites, called the almanac. This information is transmitted repeatedly over 12,5 minutes.
These functions are under continual development. Some of the newer receivers have a very short boot-up time.