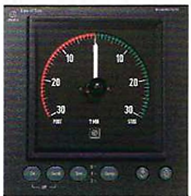 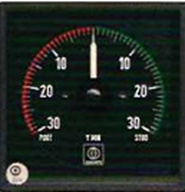 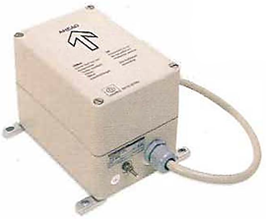 Rate of turn gyro with operator panel and a repeater that shows the rate of turn, ROT. (Raytheon Anschutz) 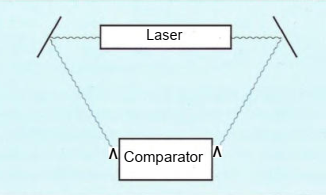 In order to detect rotation of the instrument, the Ring Laser Gyros (RLG) uses mirrors to reflect laser light. The laser beam is split, so that one beam is directed clockwise and the other anticlockwise. They are then refleced by mirrors. When the device is not rotated the two beams will reach the comparator without phase difference. But when the device is rotated the laser beams has to travel different distances to travers the circuit. This difference is detected by comparing their phases and the rotation can be measured. This function is based on the so-called "Sagnac" effect.


A Fibre Optic Gyro (FOG) uses a similar concept to the Ring laser gyro, but a fiber-optic coil is used as a very sensitive rate sensor.

The input laser beam is split into two beams that travel the same path but in opposite directions: one clockwise and the other counter-clockwise.

When a rotation is applied, the optical path for one beam becomes slightly longer while that of the opposing beam becomes shorter producing Sagnac frequency shifts.

A combination of three such fiber-optic coils (gyroscopes) and a dual-axis electronic level sensor is able to determine the direction of true north.

This system has no gimbals, no moving parts. The Fibre optic gyro will not have any speed,- or ballistic error, but a small error that increases with increased latitude.

When the Gyro is not rotating, the distance travelled by the light are of equal length in both directions, and no phase difference will occur.

When the Gyro is rotating, the distance travelled the different ways are not equal, and the detector can detect a phase difference. The FOG translates this into a measurement of rotation


The satellite compass measures the course of the vessel by comparing the phase difference between the carrier waves of the different satellites. This requires that the special antenna receives sufficient data
from satellites: some compasses need at least 6 satellites for this purpose. Satellite compasses may have up to four antennae. From the signals received the instrument can calculate several parameters:


The results are very accurate. The satellite compass also receives GNSS data regarding position and sends the signals to the navigation computer, so there is no need of additional antennae.
If the signals are cut off by, for example, bridges, or in canals or harbours then the reserve system of the compass will take over the business of calculating the course for a short time, or until the signal returns. The reserve system consists of a solid-state sensor for the earth's magnetic field. High-quality satellite compasses have an Inertial Measurement Unit (IMU) as a backup. This consist of three turnsensitive sensors and three accelerometers. The quality of the back-up system determines for how long the data that it supplies can be relied upon. 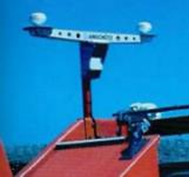 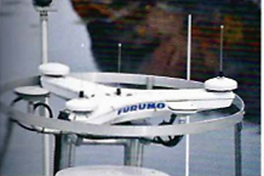 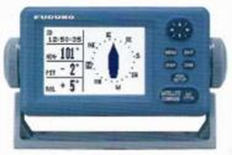 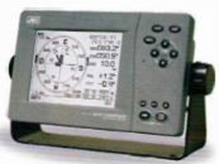 
The Short Term Stability of a GPS compass is its ability to continue to deliver information regarding position, course, rolling and pitching even when the system is subjected to disturbances such as satellite shadow, multipath errors, antenna errors and so forth.

GPS compasses have not been approved by the IMO as a replacement for magnetic or gyro compasses.