A very convenient way to calculate the battery capacity
Details

A rastered electronic chart may be a scanned image of a paper chart but these days it is usual to start from the same database as vector charts. Raster charts show images with all the information directly visible. The navigation program opens the next raster chart automatically so that the image on the plotter is seamless. Zooming in may make a raster chart image clearer- but it will not contain any additional information. The effect is the same as using a magnifying glass on a paper chart.
Tjuvholma Usually it is possible to change the colour scheme for use at night and there may be the possibility to insert pictures and other user-entered information. It is important to note that raster electronic charts cannot generate an automatic alarm for deviations from the intended course or for shoal ahead warnings.. 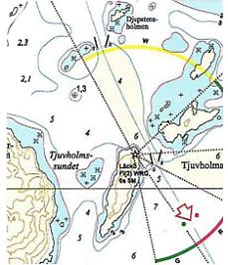 A raster chart shows all available information at once


Digital raster copies of official charts, "Raster Navigation Charts" (RNCs), can only be published by, or under license to, a national hydrographic institute. They shall conform to IHO Product Specifications RNC S-61.

British chart publisher the UK Hydrographic Office produces raster charts that are exact copies of their paper charts, ARCS (Admiralty Raster Chart Service). This comprises 3300 official charts that cover most of the globe.

ARCSs are not simply digitalis copies of paper charts, but are produced by scanning the original films that are used to print paper charts. The result is then processed to give a higher contrast.

In the USA raster charts over American waters are published by NOAA (National Oceanic and Atmospheric Administration) in a format called BSB. Several publishers use this format.

Many ECDIS can use these official raster electronic charts on the unofficial side. because ENCs are lacking over parts of the globe. ECDIS is then said to be working in RCDS-mode (RCDS, Raster Chart Display System). However the corresponding updated paper charts must be carried on board .

An RNC is defined by the IHO as:


A facsimile of a paper chart originated by, or distributed on the authority of, a government authorized hydrographic office.


A number of commercial organisations publish raster charts for use with various navigation programs installed on a computer. They can be produced simply by scanning a paper chart


The BSB format for raster charts can be read by many navigational programs. BSB-chart images strongly resemble paper charts but have been somewhat adapted for screen presentation. BSB charts may be official or unofficial electronic charts.