Radar (acronym for RAdio Detection And Ranging) is the most flexible instrument in the Navigator's tool-kit. Radar can deliver a position, a course (as a heading) and a basis for decisions about the risk of collision. On the other hand it is the instrument that demands the greatest degree of competence and work from the Navigator.

Radar measures distance and direction by transmitting a narrow beam of high energy from a continuouslyrotating antenna. Most radars transmit in short pulses but some transmit continuously, in which case there is a linear change of frequency. This socalled broad-band technique is used by leisure craft, while pulse radar is used by the merchant marine.

A patch of light on the screen (an "echo") indicates that the radar has found something. A radar image can show a great deal but none the less give little information, in contrast to the other navigational instruments that provide easily-understood values. The radar set needs to be adjusted to show an image that contains the information needed by the Navigator. Even then the image will need interpretation by the Navigator. 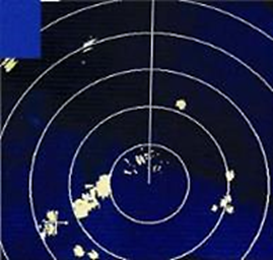 There are many different models of radar on the market and, as a radar set can have a useful life of up to 25 years, the Navigator may encounter a wide range of designs. Modern radar sets are controlled by a combination of buttons and menus. Older sets only have knobs and buttons, often with distinct shapes so that they can be distinguished even in the dark.

Older radars present a "sweep" on the screen with the same speed of rotation as the antenna. To create an image the echoes have a slow decay time. The fluorescent material of these screens can get damaged with use, which is most apparent at the centre: with time no image may be shown there. LCD screens also show the sweep, but not so clearly. The echoes are stored in the image memory until the next passage of the sweep. This makes the images more stable and the information easier to interpret.

A radar set consists of antenna, image screen and the electronics necessary to process the signals. All radar antennae rotate when in use but manyare enclosed in a protective covering (radome antenna).

Merchant ships use a radar that transmits energy as short pulses in a narrow beam. At short range the energy needed is less so the pulses are shorter, which gives an improved image. Objects at long range require more energy in order to be imaged.

The width of the lobe varies with the length of the antenna: less than 1° with long antennae to about 6° for small ones. The time required for transmission of a pulse is short compared to the time needed to receive the echo.

One's own vessel is located at the centre of the image (which is not always the same thing as the centre of the screen) and it is from this that radar measures the distance to targets. The direction is given by the antenna direction when the signal was received. 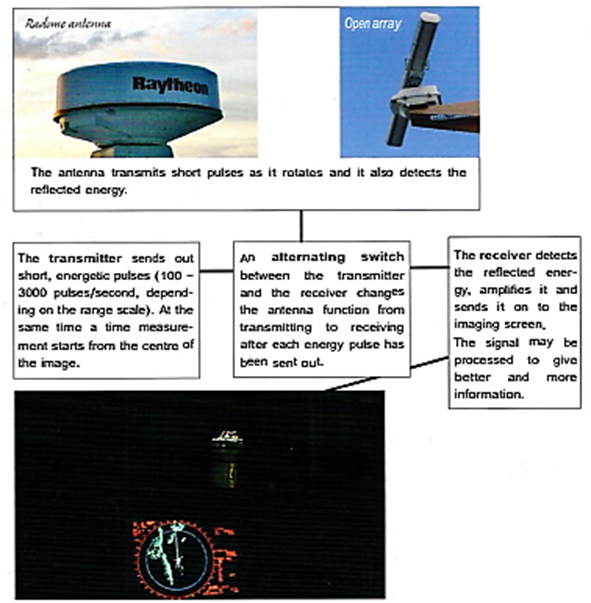 A radar screen on the bridge. The screen shows echoes from land and from the brightly-lit ship

The returning echo will cause a target to be registered as a bright spot at the correct distance and bearing from the Navigator's ship. The information about bearing is given by the position of the antenna when it detects the reflected echo.

First check that the scanner is clear and that no-body is in the area. When the start button on the radar is depressed, the set begins to warm up. Once the set is warm a "Standby" message usually appears on the screen. To start operation it will be necessary to press another switch, marked, for example, by "TX". Whether or not a visible image appears at this stage will depend on several settings.

In "Stand-by" the radar set is warm but not active. This saves current while allowing immediate activation of the set. Broad-band radar will, however, start immediately. 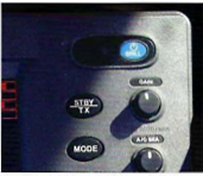 
What radar can display

Radar can display almost anything in the surroundings without necessarily providing much useful information. Most objects in the surroundings will give a radar echo, except for air, fog, a smooth or distant sea surface and smooth ice floes. Although the quality of a radar set will to some extent influence the quality of the image, the settings used are far more important.

Land as seen on the radar screen does not resemble land as seen on the chart. Neither do the echoes of objects such as ships, navigational marks, flotsam, etc., look like the real thing. The screen image has to be interpreted. A screen echo. simply means that some sort of target is reflecting the radar pulses.


New targets that appear on the open sea, and which do not have an equivalent on the chart, are vessels or other floating objects. Isolated echoes in coastal waters may also be navigational marks.

Our expectations and preconceived ideas may lead to mistaken interpretations among the skerries and islands of an archipelago. Rather similar echoes may be given by such different objects as a canoe, a rock awash, a small floating navigational mark and a swan (when close!). The appearance of the echo depends upon the characteristics of the target, the range and the settings of the radar.