An example is the load tests of the diesel generator sets in combination with the switchboard. Load tests are often done using a water resistance device that consumes electrical power by heating water. A disadvantage of the device, is that it does not simulate the ship's load which is usually partially inductive. The power factor is 1 fora resistance load so that the maximum power for the diesel is reached at 80% current of the generator. This is therefore, not a generator test where current is the limiting factor.

Load steps also give a good idea of the generator set's performance. Auxiliary engine protection and shutdown systems are to be tested as well as automatic starting of standby pumps and sequential restart of essentials after a blackout.

Further tests may include the load dependent start-stop by a power management system with automat­ic reduction of propeller pitch and/ or RPM of electric driven thrusters in case of overload of the genera­tor plant. Much of this testing can be done in harbour as it does not require the ship to be sailing.

Systems to be tested are the bridge control systems for main engines/ clutches/propellers, transfer from engine room to bridge, bridge to bridge-wing and back, emergency stops, thrusters' start-stop and controls and pitch and RPM indi­cators. This can all be done at re­duced load along the quay.

The above tests have to be carried out prior to sea trials.

Safety systems such as fire detec­tion, fire alarms, fire doors and shutters and fire fighting systems are to be tested before going on sea trials.

The fire detection in engine rooms consists of three types of sensors:

Each type needs to be tested in its own way. See pictures.

During sea trials this test is repeat­ed with engines and engine room ventilation running.

Realistic test of the smoke, heat and flame detection is done by burning diesel oil in a drum. Such tests are only carried out dur­ing sea trials to test the whole sys­tem. Adequate precautions as a fire ex­tinguisher and people with fire re­sistent clothing is a must.

During normal operation smoke de­tection is carried out using a spray can with a special testing liquid on a broomstick. Flame detectors can be tested with a good torchlight, heat detectors with an ordinairy hair dryer.

5.  Safety of people on board

Personal safety systems, such as internal communication, general alarm systems and public address systems have to be tested prior to leaving to sea.

Example of a safety checklist for main and auxiliary diesel engines 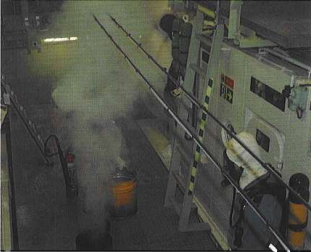 See the table above.

Autostart of the emergency gen­erator, the transitional source of power, emergency lighting, escape lighting, lifeboat preparation light­ing and lights required to launch the boats, are to be tested.

External communication systems must be tested and certified by or on behalf of the national authori­ties.

Functional tests of emergency lighting, navigation lighting, signal mast lighting and anchor lights also have to be carried out.

After successful completion of the HAT, the ship will receive a tempo­rary certificate of seaworthiness by the authorities and is allowed to go to sea.

Sea Acceptance Tests (SAT) com­plete the program by executing those tests which require sailing, including manoeuvring tests, stop tests and likewise. All these tests must be well docu­mented with values, figures, in order to be available as a ref­erence. Normally a booklet is pro­duced by the shipyard with these data.