Navigation starts with a Passage Plan from berth to berth. The planned route is plotted on the chart or electronic chart of the navigation system
Details

Range: within 30 m or 1% of the range scale in use, whichever is greater; 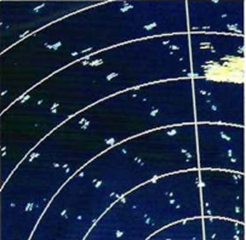 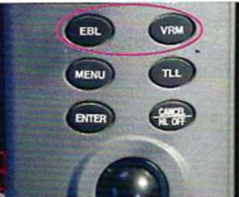 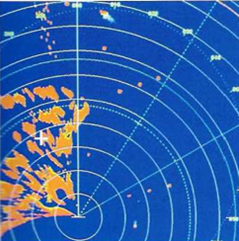 Bearing: within 1°
The system accuracy of fixed range rings should be within 1% of the maximum range of the range scale in use or 30 m, whichever is the greater distance.


Many manufacturers have developed the radar screen so that it can display a lot of information. Almost all manufacturers are constantly developing the functions that has to do with a clear screen image, as auto-gain, auto-tune, auto-seaclutter and auto-rainclutter. Its a good behavior by the Navigator not to use them before being convinced of their effect.

The radar image can be conected to the electronic chart and displayed at the same scale (Chart radar).

How much information a Navigator wants to have available is related to the specifics of a given navigational situation and is also a matter of personal choice. Some Navigators will always keep the radar image and the electronic chart image separate, other like to have them combined.


Chart radar allows the navigator double-check the position and the compass and is an aid to distinguish between fixed and moving targets.

ARPA, (Automatic Radar Plotting Aid) is a function that can give the OOW much information about collision risks and this function has the ability to make trial manouvres for collision avoidance. In the ARPA function the radar has the ability to mark and "lock" (acquisition) on a taget. This ability to lock can be either automatic or manual. The computer decides what is the centre of the targets echo and follows its movement. When the Navigator has set a certain safety range (called CPA, Closest Point of Approach) the ARPA will give an alarm for collision risk.

The ARPA is mainly an anti collision device, but can even be used for identification of objects of interest for navigation. When an echo shows up as not a moving target, may be it can be identified as a terrestrial object or another stationary object. 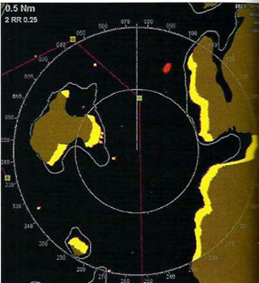 A radar image with a simplified chart overlay. Echoes that do not correspond to charted stationary objects are coloured red on this set. This means that all moving targets give red echoes 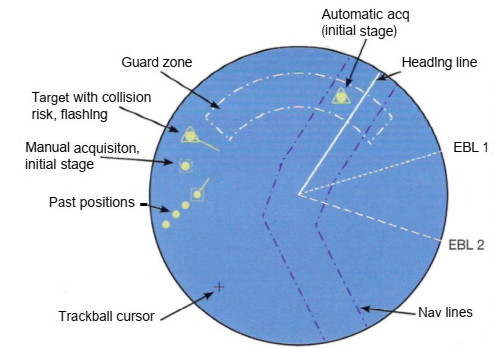 A radar can have a lot of functions for navigation and for collision avoidance. Even AI5 symbols can be seen on the screen 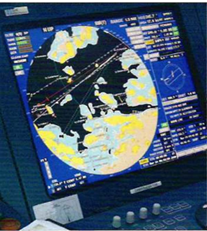 Radar facts and in some cases even manuals can be found on the websites of manufacturers.