The art of the navigator

Navigation was defined as the theory and practice of navigation. Marine navigation includes methods for monitoring the position of ships using navigation equipment, instruments and radio navigation systems.
Details

Its task is to transfer the torque generated by the engine to the screw. It usually consists of a countershaft and a tapered shank on which a screw with exactly the same tapered bore is attached. The shafts are supported by several bearings. 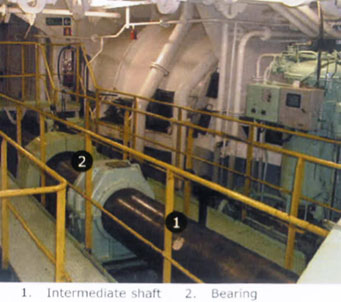 The tail shaft rotates in an oil-filled stern tube with its bearings. The pipe is sealed on both sides - the outer gland (right in front of the screw) prevents seawater from getting inside, and the inner one prevents oil from leaking out. Both oil seals are crimped from the inside by excess oil pressure in the stern tube. The pressure is created by the oil tank raised above the waterline. This is one of the many ingenious engineering solutions used on ships.

The variable pitch propeller shaft is more complex due to the hydraulics required to rotate the blades to the desired angle. For some reason, the CPP is left-handed and the fixed screw is right-handed.

When the rpm of the main four-stroke engine is higher than the desired propeller speed, a reduction gearbox is installed between the two . If a shaft generator is installed on the boat, its shaft is also rotated by the main engine using an additional power take-off installed on the gearbox .

Power to the input and output shafts is supplied through couplings, which can have flexible elements to damp the resulting torsional vibrations.

The ship's machinery (steering gear, lighting, ventilation, pumps, compressors, air conditioners) requires a lot of electricity to operate. To generate it, each ship has at least two diesel generators, the same duplication principle as in many other ship systems. When one generator is running, the other can be repaired, serviced. Each of the generators fully meets the ship's energy needs. This ensures uninterrupted power supply. 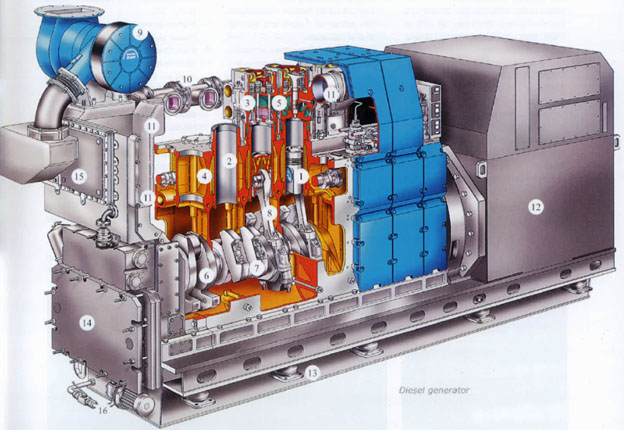 Marine generators produce 3-phase current of 440 V 60 Hz. They are connected to the buses of the main switchboard in the so-called parallel mode, which allows synchronizing the phase of the current generated by both generators and switching from one generator to the other without being noticed by consumers. The synchronizer panel is installed in the switchboard.

The power generated by the diesel generator is controlled by the amount of fuel supplied, thus maintaining a stable voltage and current frequency.

On ships with CPP, where the main engine speed is constant, a shaft generator is increasingly being installed. The main engine usually runs on cheap heavy fuel, unlike diesel generators, providing significant savings.

There is another way to get electricity when the main engine is running. We are talking about waste heat boilers that generate steam from the heat of exhaust gases. There is so much of this heat that the steam turbine generator fully meets the current needs of the vessel for electricity.

To supply electricity to the main consumers (navigation lights, steering gear, lighting, bridge equipment) in emergency situations, in the event of a complete power outage, an emergency generator is automatically started - the last line of defense of the ship's power system. It is often located on the deck of a ship in a special container and continues to operate even when the engine room is flooded with water. To maintain the emergency generator in full readiness, it is periodically serviced and started, disturbing the peace of the sailors sunbathing on the deck, free from watch.