Calculate the recharge time of the battery

Radar transponder (SART) may be activated by a signal from  any radar 3-cm band (X-band) in the range of  range of about 8 nautical miles. Each time the decision  signal from the radar emits a series of respondent reply pulse frequency  which varies periodically throughout the frequency range radar.When  activated, the SART first rapidly (within 0.4 ms) range runs, after  which it starts relatively slow (in 7.5 ms) transition back to the  initial frequency.This process was repeated 12 times. At some point in  each cycle SART frequency will match exactly with the frequency of the radar  trigger the SART, and thus within the bandwidth  radar receiver. If RLS is within the range of the radar  to match the frequency for each of a series of slow cycles 12 generates a response signal on the radar screen. Thus, the screen  will display a line of 12 points, spaced at  a distance of approximately 0.64 nautical miles.
When the distance from the radar to the SART is reduced to about 1 nm on  radar display can also see the 12 responses received during the  'fast' scans. These additional dot responses which  evenly spaced apart by 0.64 nm are 'woven' in  the original series of 12 points.Thus they will be weaker and less  amount than the initial point. 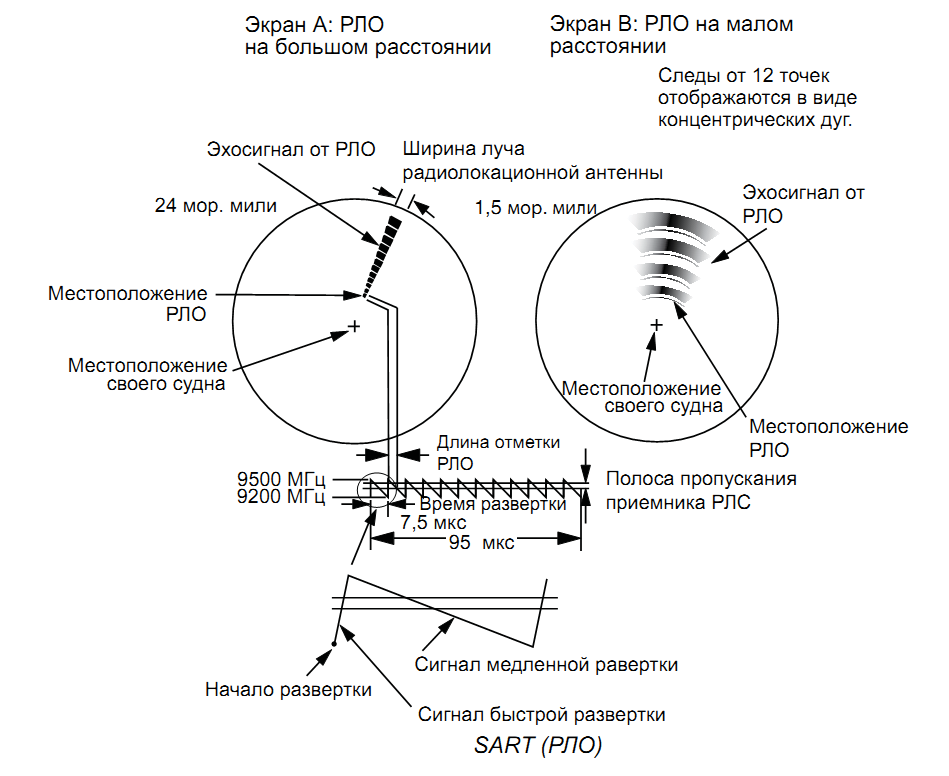 Errors in range SART  If you see only the response signals from the 12 low-frequency sweeps  (SART deleted when more than 1 nm), a position in which there is a  first point can be significantly (up to 0.64 mor. miles) on  the true position of the SART . As we approach the RLS when they become visible  and also the response signals from the fast sweeps, the first of these signals  will defend away from the true position of not more than 150 m

It is generally aligned with the radar pulse length and usually  varies with the distance range and the corresponding  pulse width. Narrow bandwidth (5.3 MHz) are used  with long pulses on a large scale ranges and broad band  transmission (10-25 MHz) - with short pulses on short ranges.
Radar bandwidth of less than 5 MHz will slightly weaken the  SART signal, so it is preferable to use the middle lane  bandwidth to ensure optimum detection of the SART.

As we approach the SART, radar antenna side lobes may  show the SART response parcels as a series of concentric arcs or  circles. This can eliminate the interference cancellation controller from the sea,  although this phenomenon can be useful, because the signals of the side  lobes may be more effective in detecting conditions  of rain and, in addition, is confirmed by the proximity of the vessel RLS.